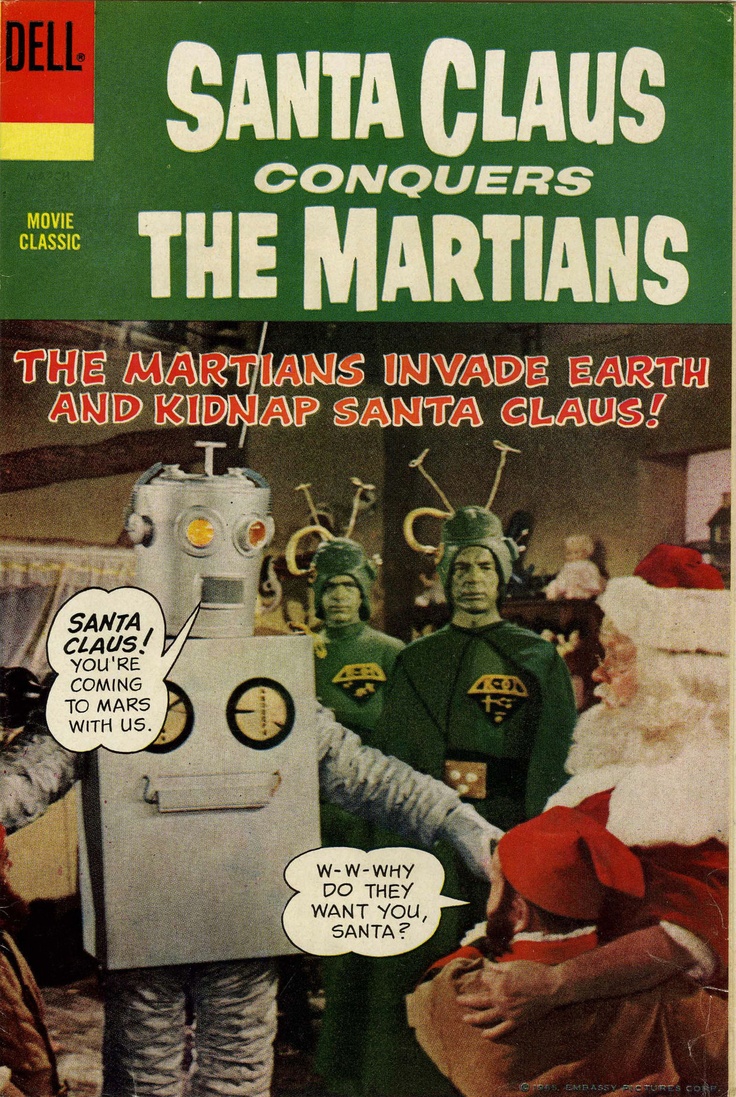 We’ve seen some of our favorite cartoon characters in many forms. Sometimes a Disney duck or dog becomes a superhero and sometimes a hulking comic book superhero becomes a whaling baby.

So, what were they thinking when they came up with this? Skeletons of Cartoon Characters:

See if you can guess. Here we go! 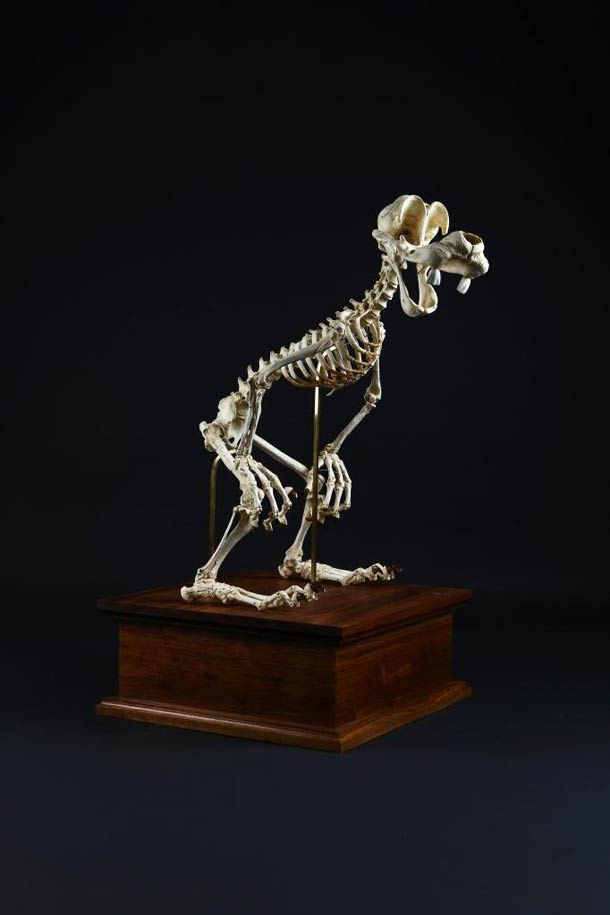 END_OF_DOCUMENT_TOKEN_TO_BE_REPLACED

DC Comics (studios?) has announced a slew of movies they will make up to 2019. One of their superheroes that will be getting the celluloid treatment is…wait for it…

Ok, now that you’ve wheezed all that excess salt water out of your lungs, yes, Aquaman swan dives from comic books to the big screen in July of 2018!

Whenever I hear “Aquaman”, I just can’t help it, I think immediately about the Big Bang Theory’s Rajesh Koothrappali whining, “Aquaman sucks!” 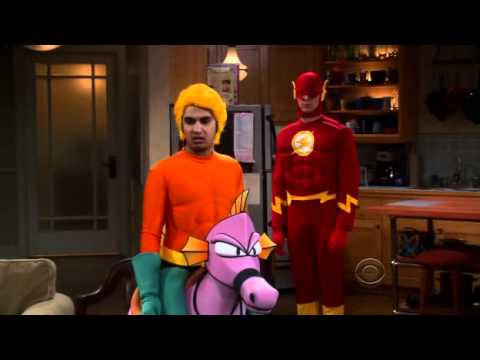 So despite “Aquaman sucks” on the Big Bang Theory, the Aquaman movie is a go!

Which Aquaman will we see in this movie? 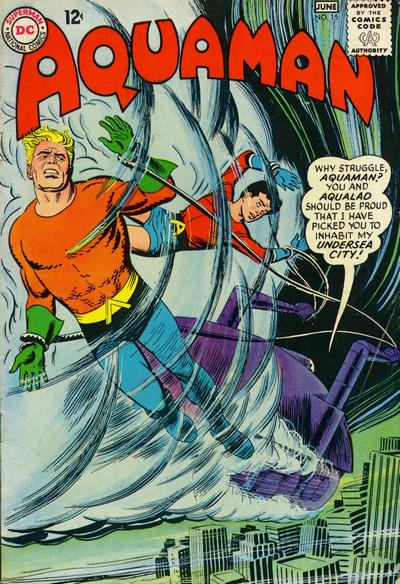 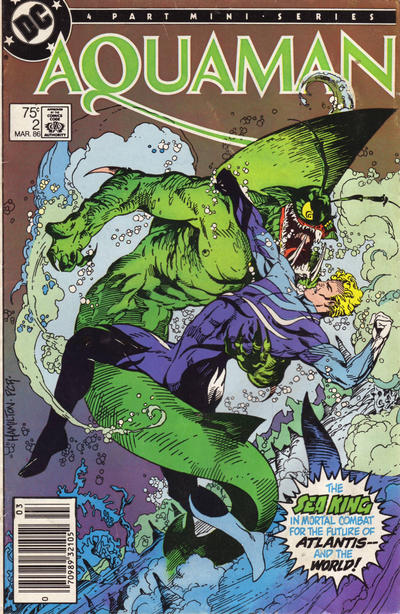 Or maybe this one? 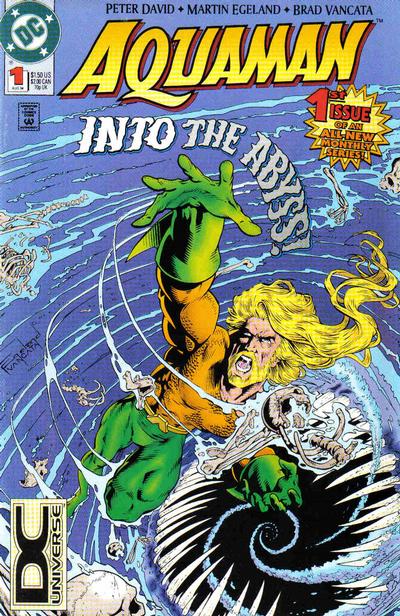 Ok, maybe this one a little more like a pirate? 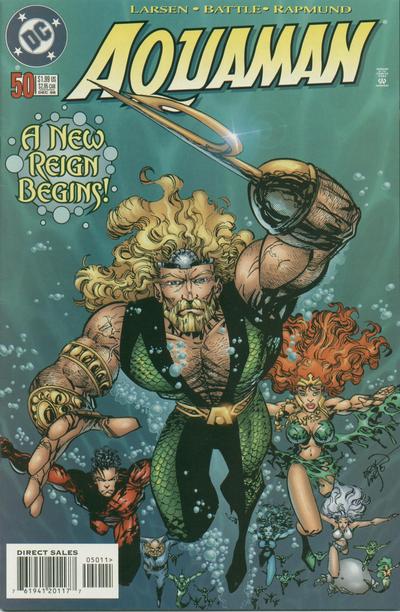 Or finally how about this version? 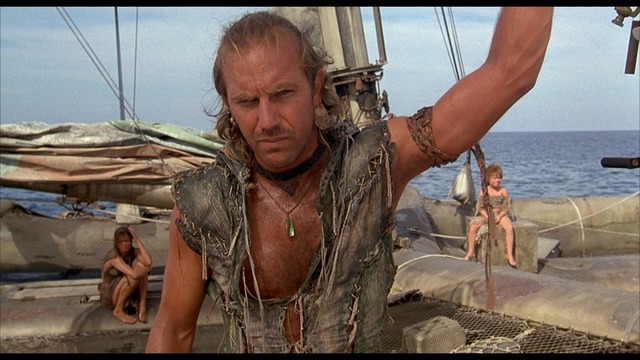 Hey why not Kevin Costner as Aquaman? After all, Waterworld was such a box office hit….

If he doesn’t make the final grade, how about a Waterworld – Aquaman crossover? It’s a match made in Sea World!

Now I have your attention, considering the comic cover we are going to see shortly, maybe the better question should be: Have you ever been squeezed so hard, you thought your head would pop off? Apparently, at DC Comics in 1976, the answer was yes!

This World’s Finest Comics #235 cover by Ernie Chan is actually pretty hilarious. Not only does some mysterious giant hand surge out of nowhere, it actually grabs the man of steel and squeezes so hard, his head comes clean off. And I do mean “clean off”. Nice and even all the way round, it even ejects with some force winds drawn by Mr Chan. A scene like this in the late 1940s or even now would have…let’s say…a lot more “red” in it.

So how does Superman get out of this? Sorry to disappoint you but it’s actually an imaginary teaser that repeats itself on the opening page, then is never referred to again.

I don’t know what they were thinking! Anyway, check out the hilarity in the cover below. 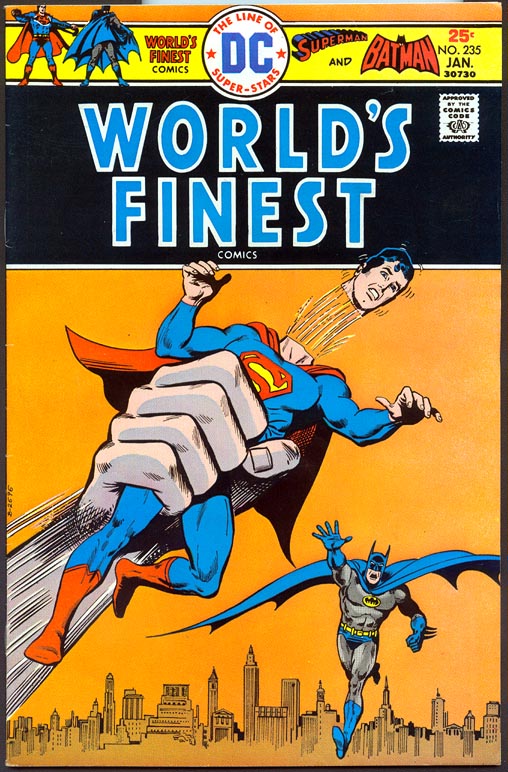 Kind of like squeezing a tube of toothpaste too hard!

One of the defining events that marked the beginning of the Bronze Age of Comics was when Jack Kirby moved from Marvel Comics to DC Comics. Jack Kirby was responsible for the creation and co-creation of some of the most significant superheroes in all of comic book history!

When hiring Jack Kirby, senior management of DC Comics asked him to take their line of superheroes in a new direction. They didn’t exactly hand him Superman or Batman, nor did they give him the reigns to Green Lantern or the Flash. Instead, they gave him a bullpen book “Superman’s Pal Jimmy Olsen”. So in effect, he could show his take on Superman in a minor title. What he did with that title was so shocking to the DC Editors of the day, that they asked an artist that hadn’t drawn Superman for years, Murphy Anderson, to redraw the faces of Superman and Jimmy Olsen, not only for the cover, but for every page in the title. Their excuse was, they wanted to maintain the same “look” that Superman had carried for the past 30+ years. So much for a new direction.

So here we had one of the most beloved comic book artists of the day, and I dare say of all time, having the facial features redrawn by someone that DC Editors didn’t want on anymore on the main franchise! Jack Kirby who gave emotion to so many characters over the years was too much for the DC editors of the day. The alterations in Mr Kirby’s style were obvious to any who knew his style.

You can see here the redrawn faces on the cover of Superman’s Pal Jimmy Olsen #144. The “new” (old) face of Superman seems to be completely disconnected from the rest of the cover theme! I mean, what were they thinking? 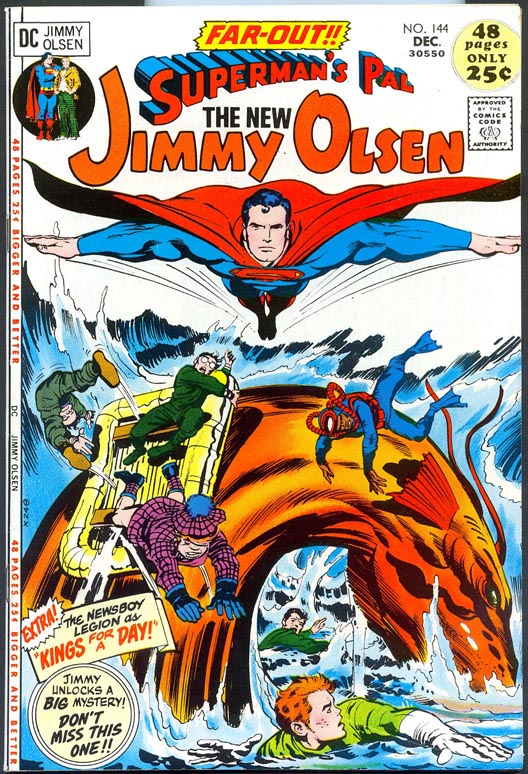 I have been searching around for any unaltered cover images to compare them to the original, but I have not been successful to-date. This minor title went on to claim great fan interest, increased sales and a real shake-up of this corner of the DC Universe. After Darkseid, it would never be the same at DC Comics. Of Course Jack Kirby went on to create a whole new universe of characters for DC, many who still exist today.

So, in the end the Comics Code Authority faded out of existence. 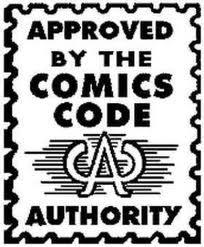 What began in 1954, left without a whimper in 2011. Marvel Comics, DC Comics and Archie Comics were the last three to administer the code. In the end, Archie Comics was left as the last to turn out the lights. Of the three, Archie Comics never took liberties with the code: 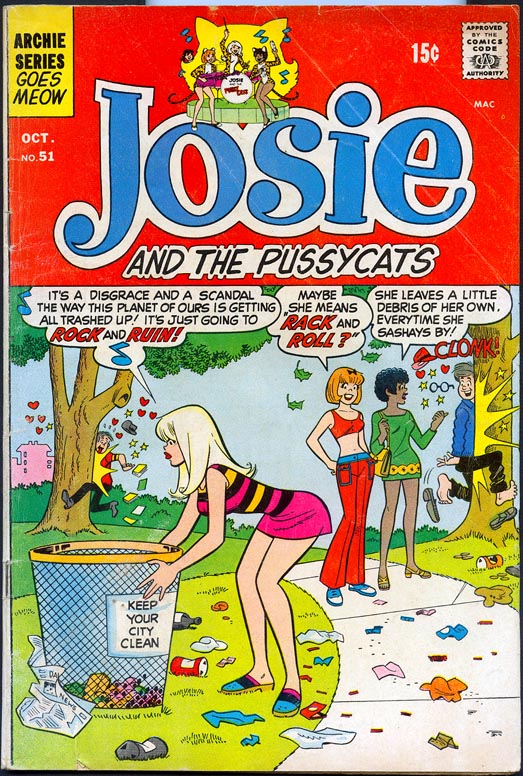 What are those guys looking at anyway? Josie and her what?!?

Now, I’d never be one to suggest that Archie Comics took liberties with the code, especially not in 1970…hmmm? What were they thinking?

After the death of Superman series of events, he of course came back. This major comic event brought renewed interest in the Superman franchise and the editorial group and creative team were scratching their heads trying to figure out some way of making Superman well…cool. While the new guys in the room were jumping up and down with, “I know, I know…how about some interesting stories?”, the decision was made to give him…long hair! I mean…what were they thinking?

This was the solution to coolness, lets have Superman come back literally sprouting long hair. He will fit in with all the other cool long hair types. So in the fall of 1993, we had Superman all of a sudden with long hair. Here is an example! END_OF_DOCUMENT_TOKEN_TO_BE_REPLACED 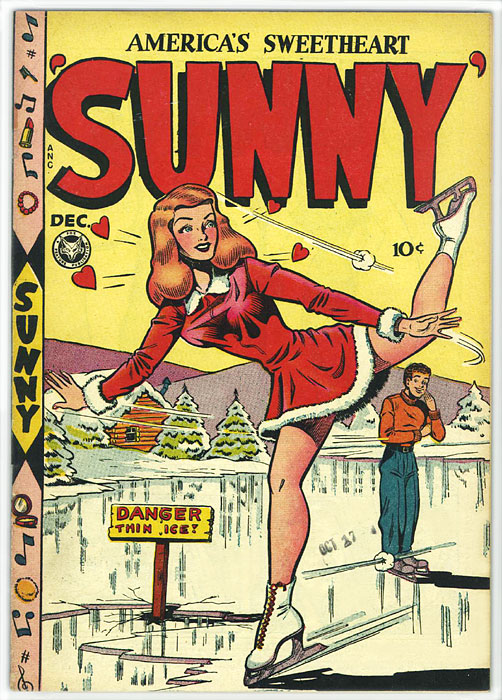 I mean; What were they thinking? Ok, so it’s back in 1959 and nobody in 1959 has a boner…right? Well maybe they didn’t call it that or…maybe they did…

Western Publishing had a great tun of Four Color Comics from 1942 to 1962 with a total of 1,354 issues. No way this could happen today, especially at Marvel Comics where their them of this decade is “relaunch every year”!!! But, I digress…

In Four Color Comics #1054, published  in 1959 has a one pager (inside front cover) starring Huckleberry Hound in “Huckleberry Hound’s Snow Boner“. Yikes! Pete Alvarado is credited with the pencils but what I really want to know is, who was in charge of the script, lettering and editing! The gag wasn’t too funny in 1959, but it’s pretty hilarious now!

Here is the one-page gag in all it’s hilarity: 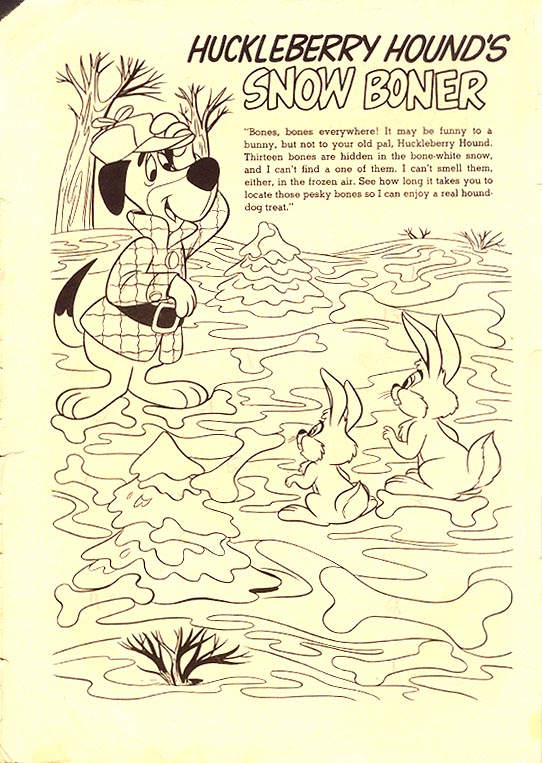 Back in 1966 we were shifting into the twilight of the Silver Age of Comics. Maybe the creative ideas are running a bit thin with the Comics Code Authority ready to censor just about anything that might be interesting to read. But, this one title “Superman’s Girlfriend, Lois Lane” can provide a history lesson in silly  story lines of the silver age of comic books! Here is a fine example published by DC Comics in May of 1966. I mean, what were they thinking? END_OF_DOCUMENT_TOKEN_TO_BE_REPLACED