There is general consensus that the Bronze Age of comic books arrived in 1970. The arrival of Conan the Barbarian in comic book form was one of those events that defined the beginning of the Bronze Age.

Conan was not typical of your comic book hero of the day and previous to this you could find Conan stories in many books by Robert E Howard, often with some amazing covers by Frank Frazetta. Conan, was originally created by Howard, in a series of fantasy stories published in Weird Tales “Pulp” Magazine in 1932. So you see, Conan was not a character created by Arnold Schwarzenegger in the 1982 movie “Conan The Barbarian”. But rest assured, the popularity of Conan in comic book form was influential in the green light to film the breakthrough movie for Schwarzenegger.

Roy Thomas adapted Robert E Howard’s fantasy world to comics and artist extraordinaire Barry Windsor-Smith would pencil the cover and inside artwork. Just one look and you can see what the barbarian is up against on a regular day at the Cimmerian office. There is no peace for Conan in the Hyborian Age.

The cover is complex, loaded with influences from Jack Kirby and Jim Steranko. You rarely see multiple characters used to this extent, even in most covers. Complex and detailed scenes became a Windsor-Smith trademark and in just a few issues, the true style of Barry Windsor Smith was there for all to see. See Conan The Barbarian #24.

This first Conan series of comics lasted 275 issues, so the rich world adapted and expanded on by Thomas and Smith ensured a long future, not a run we are likely to see again in this relaunch obsessed comic decade. This comic makes the list of all-time favorite covers both for it’s historical significance (beginning of the bronze age) and the fact that it is also a gorgeous piece of artwork. 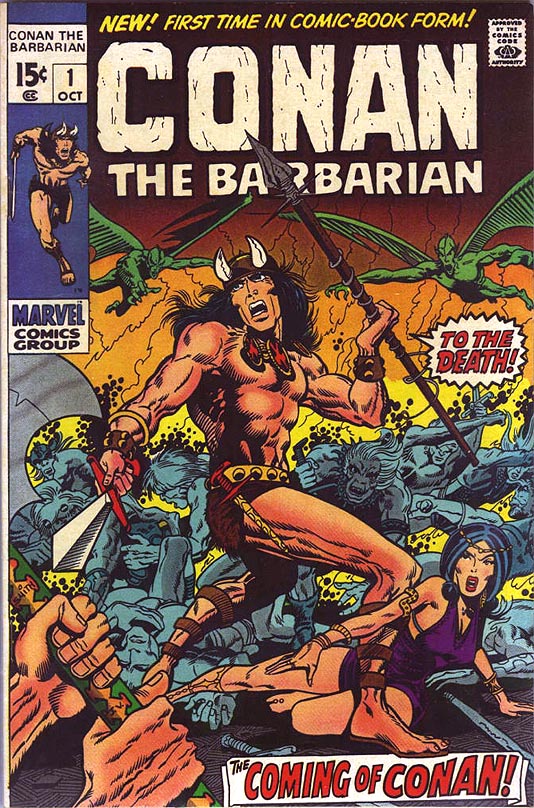 Conan The Barbarian #1 from 1970 and the skilled hand of Barry Windsor-Smith.