Michael Turner had a short but spectacular career in comic, cut short by his death in 2008. But from 1995, up until he left us, he was prolific. With his co-creation of Witchblade for Top Cow Comics in 1995, comic fans delighted with Turner’s mastery of the human form and especially his artistry with the female form. His cover art was spectacular and, dozens of his cover images would be no stranger in anyone’s all-time favorite comic book covers.

As collectors snapped up his variant covers and original artwork, he was constantly in demand, not only from comic book publishers but also on the convention circuit. From his enormous library of gorgeous covers, there is one that represents more than just a pin-up. Well, ok, it is a pin-up too but there is more going on than that. His artwork was so popular, he was given a free hand by DC Comics in a 6 issue Supergirl story arc in the Superman/Batman series. This storyline revitalized the Supergirl comic character.

While still at Top Cow, Michael Turner created Fathom in 1998. Before he brought the character with him to Aspen Comics (the name of the main Fathom character), he produced 16 issues, with many of those sporting variant covers. For the best Fathom cover, I give you issue #9 from 1999: 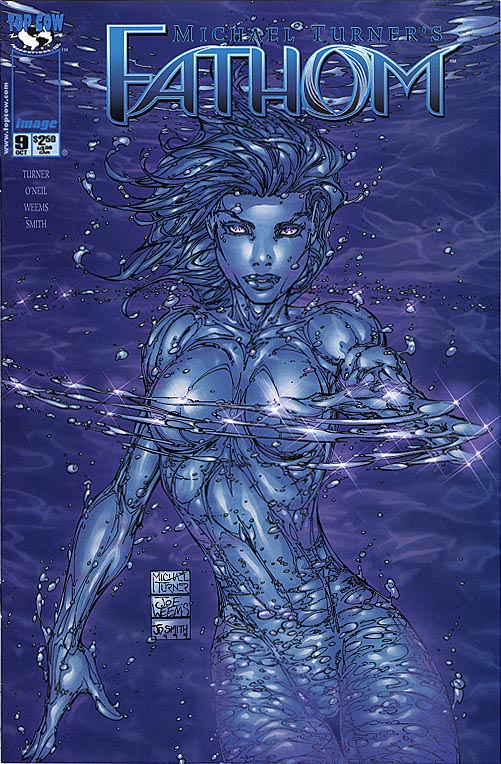 Note that besides being a great pin-up, the watery transparency of the main character, has never been duplicated in comics before. Credit also has to go to Joe Weems and JD Smith on this cover. The face is sensuous but the eyes stare right through you to some other realm. A clever use of arm movement and starry points provide anticipation into a power that is about to be unleashed.

This is a 1 in 5 chase variant cover and the holofoil version, a rare variant comic, is spectacular as well.

Michael Turner is missed but his artwork and influence will be with comic always.