In this multi-part series on the history of variant comics, we are exploring series of variants that collectors are likely to find, albeit some being much more difficult than others, depending on the rarity of those series. I have stayed away from the “one-off” variants of which there are many but most are rare. Part 1 and part 2 explored the first series, the “price variant comics”. In part 3, part 4 and part 5, we dug into the second series, the “printing variant comics”, covering second printings, third printings and so on. In part 6 we discovered the “alternate publisher” variants, namely the “Whitman” and “Modern Comics” variants.

In this, part 7, we will begin to cover the last series of variant comics, which is the most prolific in sheer volume today and continues to play a major role in how comic books are marketed. The introduction of these variants was part of a series of events that nearly destroyed the comic book industry. This final series are the “variant covers”. In their early years they were referred to, somewhat non-affectionately as “gimmicky covers” or “chase covers”. These were introduced specifically targeting the many completist comic collectors, especially Marvel Comics collectors, who existed at the time. But I wouldn’t be doing this final series of variants justice without spending some time with the story behind what spurned variant comic book covers.

It all started with Baseball cards, yes that’s right, baseball cards. Like many kids growing up before the age of the internet and video games, sports card collecting was a bit of a rite of passage. Topps Chewing Gum Inc., cards were the king of all sports cards. Topps started out with Bazooka bubble gum…remember Bazooka Joe? But I digress…

Sports card packs have always offered the “chase card” aspect to collectors and non-collectors alike. You always wanted to find that card of your favorite player or one of the few real stars in the game. There was always a chance your favorite would be in that unopened pack sitting in the box on the counter of your local convenience store! When you didn’t find that desired card in one pack, you might swear that you’d never buy another pack again, but you always came back for more. When you found the coveted card, it usually was placed in a special spot I your room…until your interest in sports cards was replaced by…other things in life. All the other cards? Their fate was less honorable. We’d buy them, fold them, put them in our bicycle spokes to make noise. We’d even bring stacks to complete in tossing them against the wall, with the card closest to the wall winning all the other cards thrown at the same turn. Becoming an expert in throwing a “leaner” (the leaner leaned up against the wall and was nearly impossible to beat) was a sure way to win a stack of cards every game. Sometimes, you found your favorite player this way too! All this abuse of sports cards, mostly baseball, was a sure way to ensure that few descent cards survived in good condition, thereby eventually making those few older cards in good condition, collectible. There are many similarities with old comics, all except for throwing them up against the wall…at least I didn’t do that one.

All this abuse of sports cards began to change in the mid 1980s. A group of collectors made news by traveling around the continent, buying up collections and discovering that certain cards were almost impossible to find, especially in “mint” condition. All of a sudden, people were digging up their old card collections of their youth to see what they had. 99% of us were dismayed by how beat up our old collections were.

The “chase card” aspect of the sports card industry garnered a lot of attention with the printing of the most famous “error” card in the history of baseball cards, the 1989 Fleer Billy Ripken “F#@k Face” card. Anyone interested, especially the kids, went crazy trying to find this card. Fleer 1899 unopened packs were fetching $10-15 each, just on the possibility that you might find the famous Billy Ripken “error” card. Here is what the fuss was all about. 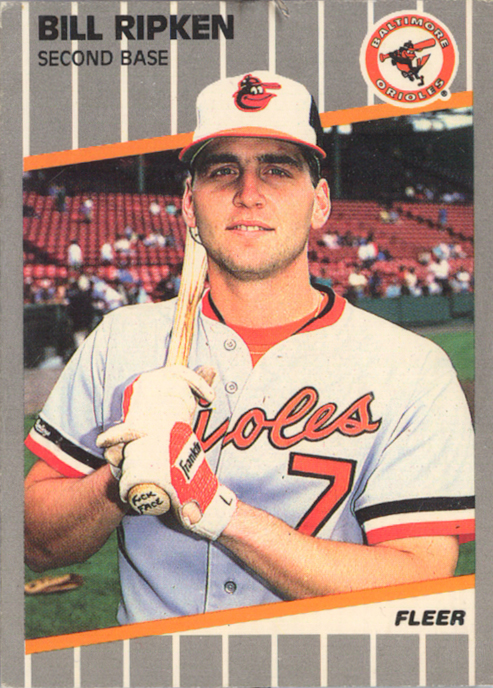 The most famous baseball error card of all time. The Fleer 1989 Billy Ripken

Coincidentally, in the same year, a new company “Upper Deck” produced their very first baseball card set. Marketed as a premium set targeting for the first time, adult collectors, card packs were $1 each, double the usual 50 cents and contained half the usual number of cards. The cards were beautifully done and collectors went nuts snapping them up, while the kids stayed away due to the 4x increase in cost per card. Things moved quickly from there, with the kids being entirely squeezed out of the sports card market shortly after. In 1990, Upper Deck sought to capitalize on that “chase card” market by being the first to randomly insert, into card packs, personally autographed and numbered cards of superstars. The chase card collectible was off and running. By 1991, over 3 million people were collecting baseball cards. Conventions were held every weekend, sometimes 3-5 at the same time in the same city! Adults were the big collectors of the time. Sales passed the $1billion mark and in the early 1990s, 81 billion cards were printed in a single year. That is a lot of cardboard!

It was inevitable that it all came to a crashing halt, with the glut on the market, greed of both licensing entities and the companies who produced the cards. The last straw was an eight-month baseball strike in 1994. It was over for the sports card collectible market. It hasn’t recovered.

I covered all this to set the stage for what comes next! Turn the page to the comics industry. Marvel Comics was purchased by financier Ronald O Perelman in January 1989. He and his executive team saw the explosion in sales in the sports card industry. He challenged his team to increase sales by capturing some of that chase card mentality and applying it to comic books. to be continued in part 8 The History of Variant Comics Part 9 is here and is the last part of this series

5 thoughts on “Variant Comics from then ’till now – Part 7!”