In this multi-part series on the history of variant comics, we are exploring series of variants that collectors are likely to find, albeit some being much more difficult than others, depending on the rarity of those series. Part 1 and part 2 explored the first series, the “price variant comics”. In part 3, part 4 and part 5, we dug into the second series, the “printing variant comics”, covering second printings, third printings and so on. In part 6 we discovered the “alternate publisher” variants, namely the “Whitman” and “Modern Comics” variants. In part 7 we talked about the groundwork for the last series of variant comics, the “cover variants”, which are everywhere today.

Ronald O Perelman bought Marvel Comics for $82 million and change in January 1989. He then took the company public and scored big on his initial investment solely with 40% of Marvel’s stock going to public hands. He believed that if he increased the number of comic series and raised cover prices; hard core Marvel fans would spent more and dedicate more of their comic buying budget to the Marvel brand. To some extent he was absolutely correct! His major failure was that he also promised those investors, who purchased shares from him, that there would be more price increases and more comic output from the company. But the cover price increases occurred too fast. When he took over, cover prices had been raised by Marvel’s previous owner from 65cents to $1.00 in only 3 years. Two years later, under Perelman, they were $1.25, two more years $1.50, a doubling from 75 cents in just over four years.

Popular titles, Amazing Spider-Man and Uncanny X-Men, to name just two, began publishing twice per month instead of the usual once per month. Increased production and titles diluted quality and collectors began to abandon their hobby due to increased cover cost and a glut of poor storytelling. There were certainly good books during this time but you had to sift through sub-par work to find them. During his ownership, to increase output, Marvel introduced the 2099 universe and Marvel UK Comics with the total number of comics published per month doubling to over 140, from just under 60 monthlies in 1989. Both the 2099 and UK Comics lines failed to trigger popularity with collectors and many saw these as examples of Marvel’s 1990’s move to less quality and overall money grab. Many fans and collectors were disillusioned and gave up their comic collecting hobby. Perelman eventually had Marvel Comics declare bankruptcy in 1996. How did variant covers play a role in this?

So, back to the variant covers! Perelman pushed his creative and editorial teams to increase single issue sales and to somehow capture the “chase card” mentality into the comic industry. Since comics weren’t sealed, the solution was to produce alternate covers. Taking a page out of Upper Deck Sports Card playbook, Marvel added metallic foil covers and charged double the regular cover price for the same material! Some of these covers were limited to the Direct Market establishing them as “chase covers”. The next step was to produce multiple alternate covers, believing the Marvel completeist would be compelled to purchase at least one of each cover. Again, to some extent he was absolutely right!

The first up to bat was Spider-Man #1. One of the industry’s hottest artists of the time, Todd McFarlane, was given free reign to write and pencil a Spider-Man Comic. In 1990 Spider-Man #1 was released with several different covers, some limited incentives. Stores and a few collectors ordered boxes upon boxes, some to obtain the chase covers. Spider-Man #1 became the top selling comic up to that time. Altogether, there were 9 different covers, including a bagged version and a second printing, but many simply employed different colors. Spider-Man #1 became the top selling comic up to that time. Copies of Spider-man #1 were quickly marked up in price. I remember one comic store in my neighborhood had an entire 20 foot long wall of Spider-Man #1. Believe me, everyone, especially the publishers took notice! 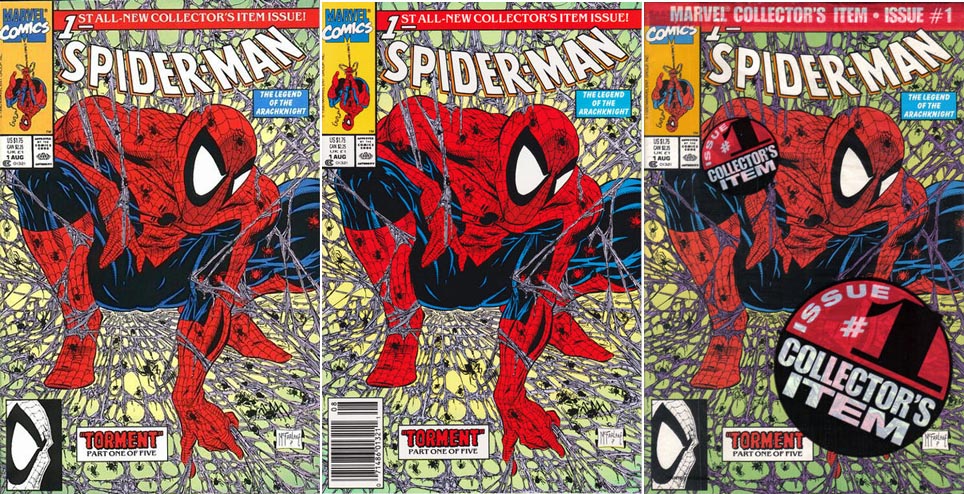 Spider-Man #1 on the left the Direct Market edition, in the middle the Newstand edition, on the right the Polybagged edition 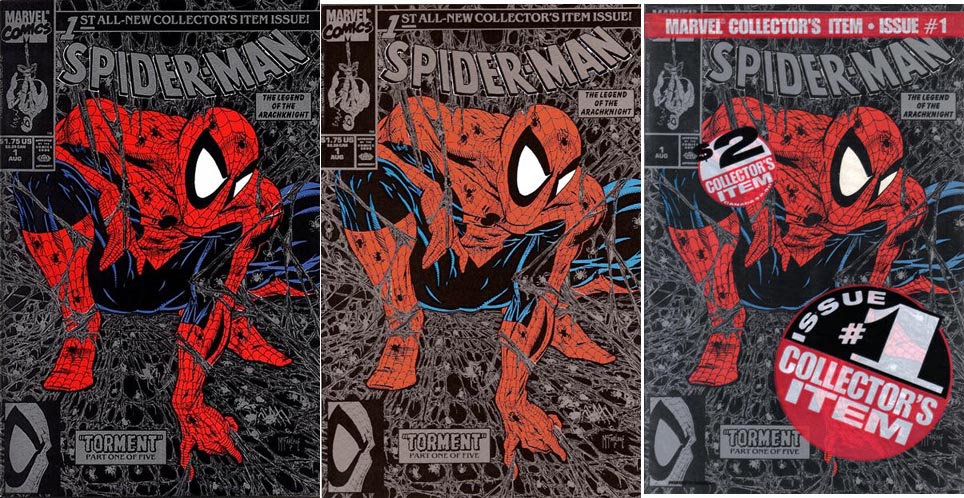 Spider-Man #1, on the left the Silver Edition, in the middle the incentive Silver variant, on the right the Polybagged edition. 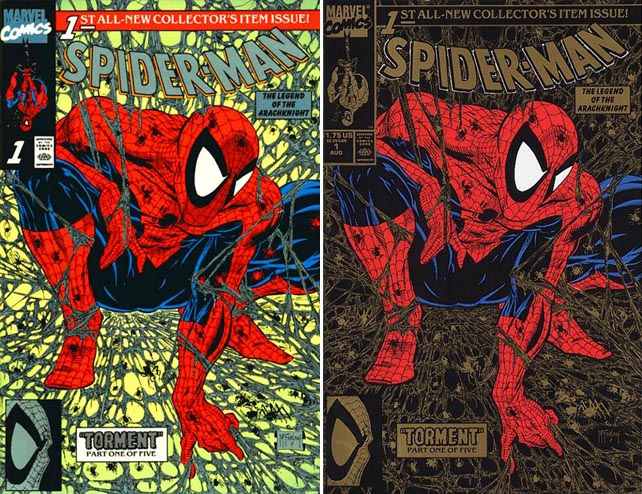 Spider-Man #1, on the left the limited Platinum edition and on the right, the second print gold edition

Next up was a launch of a new team in their own title “X-Force”. In 1991, X-Force #1 had seven different versions, with many being different only because they were polybagged with a different collector’s card, effectively merging the chase card with the comic book industry. 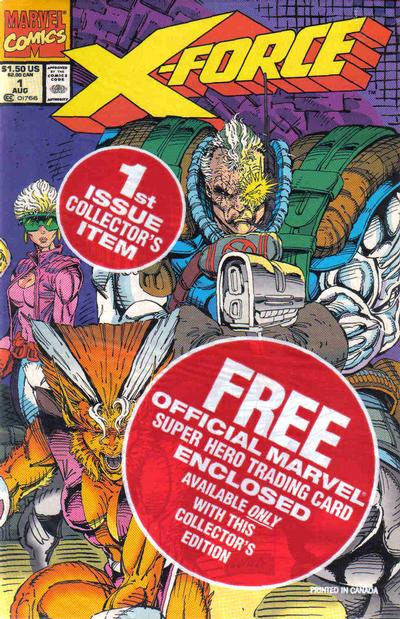 This one image represents all 5 of the X-Force #1 variants!

As you can see, there is no difference in the cover but, there were 5 different trading cards (one per bagged issue) and everybody just had to have one of each. This issue sold approximately 4 million copies! Oh and by the way, here are the 5 cards: 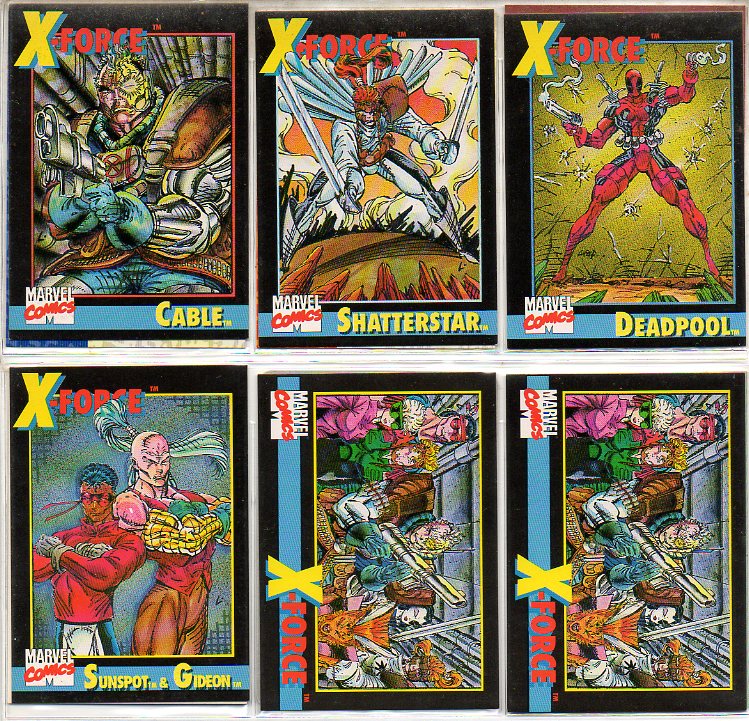 Last but not least, there was a second printing with no cards: 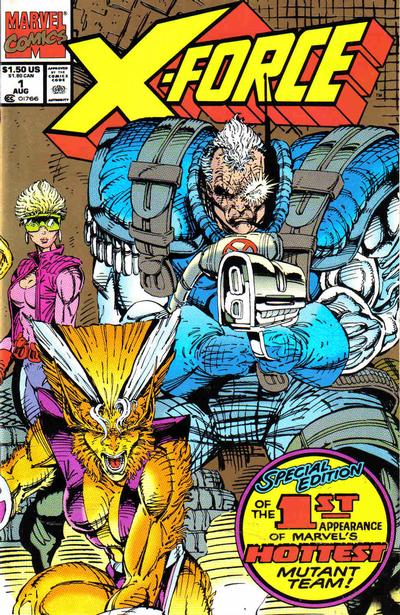 Two months later, the big one launched from Marvel from the co-creator of the mid-1970s “X-men”, Chris Claremont and another hot artist of the day, Jim Lee. X-Men #1 hit the stands with five different covers. Four unique covers, with different pinup pages in each and a 5th cover being a gatefold cover of the four. X-Men #1 became, and still is the best selling comic book of all time, selling approximately 8 million copies. Pretty good for a collectors market of about 300,000 at the time… Collectors had to have at least one of each cover and Marvel Comics had achieved what Perelman wanted, increased output and profits. Other publishers quickly jumped on the bandwagon copying every aspect of Marvel’s strategy. We know how that ended. 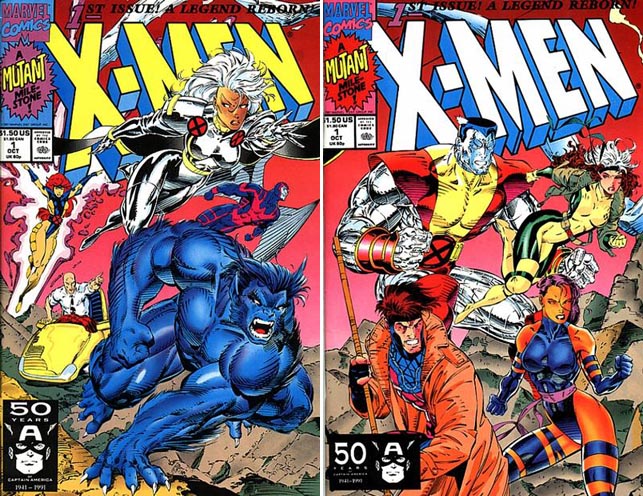 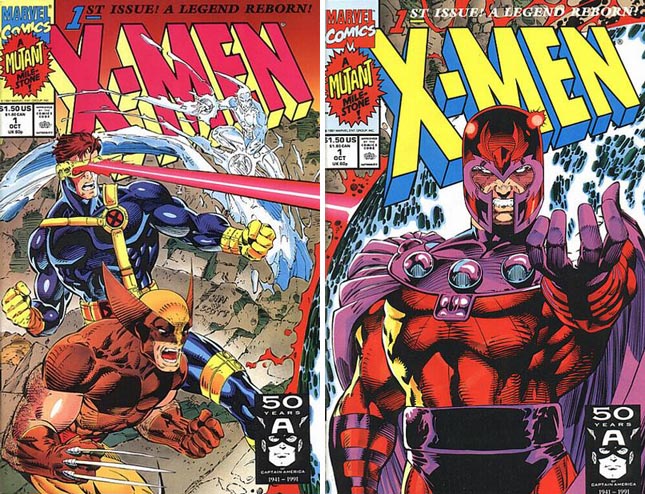 But, the trend was now in motion. Publishing a comic and including a variant of that cover was a proven method to selling more copies of that comic than without the variant. In part 9, the last of this series, we will see how this trend eventually evolved.

3 thoughts on “Variant Comics from then ’till now – Part 8!”